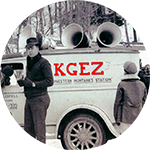 KGEZ really is Montana’s original radio station, serving its original community. Signing on in the early 1920s and officially licensed to the Flathead Broadcasting Association in Kalispell on March 31, 1927, KGEZ has seen NW Montana through the Great Depression, two world wars, the Korean War, the Vietnam War, and the attacks of September 11, 2001.

In those early days, radio was thought of as a hobby, and that’s what it was to Kalispell physician Dr. J. Arthur Lamb, who told the members of the Kalispell Chamber of Commerce that KGEZ would “put Kalispell on the map.” He envisioned public services, such as weather reports and news, a vision that has been shared throughout the years by KGEZ’s local owners.

The first studios were in the Kalispell Elks Temple on Main Street in Kalispell—sharing facilities with the Kalispell Chamber of Commerce, which owned the station for a time. In 1932, the Chamber’s secretary, Don Treloar, acquired KGEZ, eventually moving it to the edge of town on Highway 93 South, where it was until 2019.

KGEZ has been the broadcast voice of the Flathead Braves (and now, the Bravettes) and Kalispell’s First Presbyterian Church—which still broadcasts its services each Sunday morning. And KGEZ is NW Montana’s voice of the Montana State University Bobcats.

In 2011, John Hendricks formed Flathead Valley Wireless Association—a throwback to the original owner’s name. In 2017, the FCC licensed FM 96.5 as KGEZ’s voice on the FM band.

As KGEZ approaches its first century on the air, the station continues to take its cue from the original concept: live, local programming featuring national and local news and newsmakers, and local community leaders.