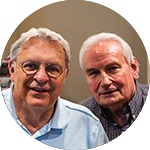 No matter how you say it, it’s always a “good morning” in NW Montana with John and Robin. Waking you up with a smile and getting you ready for your day is the mission of the Good Morning Show.

Both John Hendricks and Robin Mitchell have “made it” in the world of broadcasting – John in Seattle, Denver, New York City, and at a major network; Robin in Seattle, Portland, Boston, Cincinnati, Honolulu, and Los Angeles. Now, they do what they’ve always wanted – entertain and inform people who live and thrive where they do.

Bridging political and philosophical divides and merging them into a fun, informative, and entertaining show is what they do – weekday mornings from 5:00 to 10:00.

Robin begins the day at 5:00 a.m. with his “Early Bird Wake-Up Show,” easing you into the day with The Best Music Ever Made and all the basics to get you started. At 6:00, John joins him, and the information begins rolling out, after hours of preparation and newsgathering.

The KGEZ Good Morning Show has the only executive producer in NW Montana Radio. Brian Eklund schedules the show’s guests – usually five each morning. Local newsmakers tell it like it is – no filtering, no commentary. The people actually doing what everyone is talking about are regular guests, including Montana’s entire Congressional delegation.

It’s as non-partisan as the truth can be. It’s as many sides of an issue as are available. You’ll never hear John and Robin come to a conclusion in any news reporting. That’s left up to you, the listener.

The KGEZ Good Morning Show. Say it any way you wish. Most people say it’s GREAT!