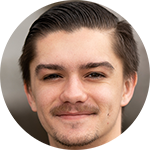 Justin Million is the associate producer at KGEZ, handling a variety of production assignments for both our news and commercial operations. Occasionally, you’ll hear Justin’s voice on commercials and other vocal assignments.

Justin was born in Olympia, Washington, and grew up in St Louis, Missouri. After graduating from Lindbergh High School in St Louis in 2017, Justin enrolled at Flathead Valley Community College and began working with us at KGEZ. Along the way, he could also be found handling front desk duties at Marriott Hotel’s Springhill Suites in Kalispell.

Last year, he realized a lifelong dream of competing in Mixed Martial Arts. After extensive training – both physical and mental – at Kalispell’s Straight Blast Gym International, he fought two tough opponents – winning both times by technical knock-outs. Having accomplished his goal, he hung up his gloves – literally – and if you ask, he’ll show you the videos of his two matches.

As for the future, Justin is open to the possibilities. Meanwhile, he’s enjoying his time in Northwest Montana camping, hiking, fishing and snowboarding.