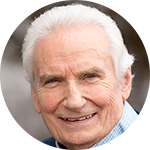 Robin says, “Before I got my first job in radio, I was a radio listener.”  That’s a perspective he has maintained throughout his half-century career. That career has taken him to top-rated radio stations in Seattle, Portland, Boston, Cincinnati, Indianapolis, Denver, Milwaukee, Miami, Chicago, and Los Angeles.

Robin was the operations manager of a major radio group in his hometown, Portland, Oregon, when he decided to try “retirement” — but it didn’t take. He heard about the relaunch of “Northwest Montana’s Original Radio Station” in 2011, and he came aboard full throttle, first hosting afternoons and then joining John Hendricks on the KGEZ Good Morning Show.

Robin Mitchell has done just about everything an air personality does on the radio.  Now, he gets to use everything he’s learned to help make the KGEZ Good Morning Show a Northwest Montana juggernaut.

Besides his work at KGEZ, Robin shares his wealth of knowledge and experience consulting radio stations throughout the nation.

He and his wife of 25 years, Darcy, enjoy life on their rural property east of Kalispell.